10 Kickstarter Projects for Makers that you need to back right now!

Kickstarter has always been supporting makers to bring their ideas to life, and full of rich maker-targeting projects. I have combined a list of  13 Kickstarter projects that are live right now, and totally worth backing!

That’s right, Arduino itself is announced Eslov on Kickstarter, a modular IOT kit that lets you build connected devices in minutes, without having any technical experience. Just connect Eslov modules, program them using visual code editor and publish your project on Arduino cloud, where you can interact with it from anywhere in the world.

Computers anyone can make by Kano

After their previous success on Kickstarter, Kano launched 3 IOT kits on Kickstarter. They are camera, speaker and pixel kits, that come with an instruction manual on how to build them. Kano started the concept of lego computers that anyone can build, and now it has proved the concept can work with IOT products as well.

STEMTera Breadboard is an innovation in breadboard history. It is the first breadboard with an Arduino compatible built-in that works with thousands of shields. With ATmega16U2 exposed, native USB projects can be easily developed using the LUFA framework. The LEGO® compatible bottom cover empowers projects to be built beyond imagination. 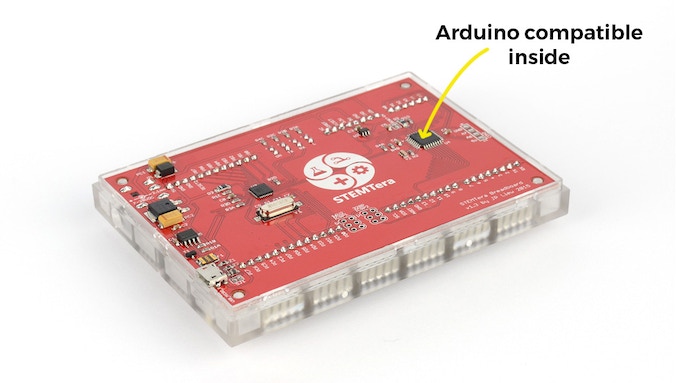 The Blinkgogo is a simple mobile robot kit that can be controlled with your smartphone and is easily assembled in 60s. You can drive it around, make it follow a line, configure it to a light seeking mode, program it via Scratch and it is solar powered. This simple robot is highly recommended for teaching kids about coding.

Speaking of teaching kids how to code, Spy v. sPi is a capture-the-flag style engineering adventure that puts real purpose to basic design and programming skills. It can be played individually or in teams, at home, in a classroom, or a workshop. In it, each “spy” is assigned a series of missions, each requiring them to write code to control an assortment of sensors that will allow them to protect their “jewel” in different ways, or capture the “jewel” of a competing spy. 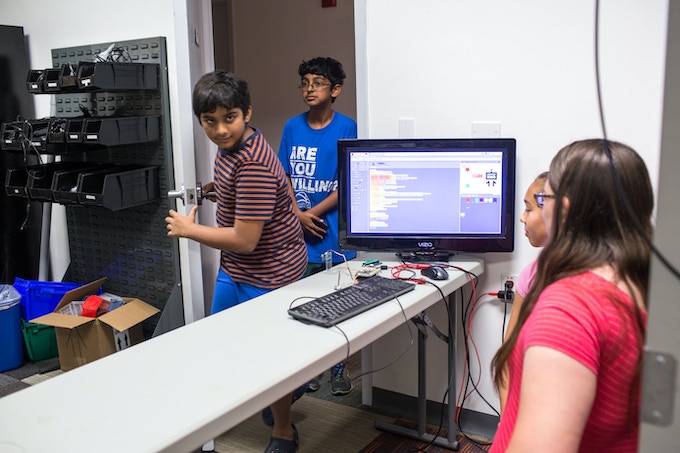 This project is built by Dexter Industries, creators of BrickPi, Arduberry, GrovePi and many Kickstarter projects.

Another way to teach coding is to link projects with real applications, and what’s better than NASA’s Spirit rover? The Spirit Rover is the next big step in advanced robots for learning, teaching, and all around hacking fun.You’ll code while learning how computer vision and autonomous robot work.

The robot is outfitted with up to three different computing processors, built with high quality components, and fit into an iconic form factor that any tech nerd can appreciate!

This project is built by Plum Geek, who previously introduced Wink and Ringo on Kickstarter.

Mimic immerses you in it’s world. Through revolutionary controls and immersion goggles you become an adorable 12 inch tall robot. Mimic can also move around on its own power, controlled by you with an IRS based foot controller. You place both feet on the controller and tilt the device forward, back, left, or right to command mimic’s movements in natural, hands free ways.

ScratchyCAD is parametric 3d modeling software which uses an easy to learn block based programming language.   ScratchyCAD is 3D design with CODE! Use short snippets of coding to start creating parametric 3D objects, or smart objects, that update their geometry automatically by changing the parameters or cv.

ESPRESSOBin Board is a low cost high performance ARM based 64bit single board computer aimed at the networking, storage, and connectivity space. It utilizes Marvell’s newest Armada 3700 chipset which is a dual core SOC running up to 1.2Ghz based upon the ARM A53 64bit instruction set.

Now, away from Arduino’s, Raspberry Pi’s and robots, let;s tap into good old building materials. Maker Pipe is a simple, affordable, easy-to use system of connectors that pairs with inexpensive electrical conduit you can find at any hardware store. The result is a building platform with endless possibilities.

On to big machines, the Chipsetter ONE is the first pick-and-place machine built to satisfy the needs of today’s electronics developers. Fast setup, accurate placement, and affordability make the Chipsetter ONE the tool to help developers overcome the final barrier to rapid circuit assembly. It’s time to take control of your assembly, and get to market faster.

Finally, we live in exciting times to see the first desktop waterjet cutter come to life! WAZER is the first waterjet cutter that can fit in every workshop. It cuts through any material and is compact and contained, making it, clean, safe and quiet to operate. WAZER’s digital control achieves detail and accuracy impossible by hand, while freeing you up to complete other tasks.

I’ve been moving around the New York Maker Faire, and I found some sneak peek coming soon campaigns that are worth the mention:

Airblock is not only a drone, but a hovercraft! Change it from a drone to a hovercraft with just a few simple modifications, and play on any terrain. You can control the Land and Sky!

Airblock is built by Makeblock who previously introduced modular robotics platform through several Kickstarter campaigns. It is exciting to see them giving attention and applying the same concept to drones! The Airblock early will be available at $89 and you can sign up to be the first to know when they launch here.

The Batuino is a battery-friendly Arduino compatible board. It can be powered from one cell of Li-ion rechargeable batetry or up to three cells of alkaline batteries. An on-board USB port is used to power, program, and charge simultaneously. The Batuino will be on Kickstarter soon, you can contact Pilwon Heo on e-mail to learn more about it. 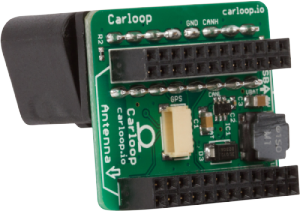 Carloop is a 100% open source kit that lets you connect your car to the Internet. You can track your car with GPS, log mileage on an SD Card or check your engine codes. It’s Plug and Play, no cables required. See what others are building on the community forum.

I met these guys today at NY Maker Faire, and I grabbed the starter pack that includes Particle Electron. They already sold hundreds of boards, they are not sure yet but they might launch a campaign soon, anyways, you can actually order it on their website now.

Ok this one is not really a maker tool, but it’s pretty cool! Square Off is a completely automated device which enables the user to play chess against a computer and even against a human opponent present at any place in the world via the internet on a physical board. Launching in 7 days, sign up on their website to be the first to know.

Kickstarter maker projects are definitely on fire! What do you think of these projects? I personally backed some of them and I can’t wait to back the Airblock. Let me know in the comments if I have missed any cool projects!

Arduino Robotics Series, from a car to a robot arm

Arduino keeps standing out from the crowd of all-around development boards due too its ease of use and budget price. As a result, this has enabled almost anyone to get his own idea into life no matter how crazy or even useless to the whole world it was, except for its maker! Also, it has …

How to build an Arduino Robot Arm placed on RC Car

Arduino robots are always funny and definitely more enjoyable when combined with robotic arm! And today, I will walk you through the making of a simple Arduino Robot Arm that’s made of cardboard and how you can attach it over your Arduino Bluetooth RC Car / Robot that you have made so far through this series. …

How to build an Arduino Line Following Robot using Cardboard

Arduino Line Following Robot is one of the easiest and most well-known projects that anyone can make to learn the basics of programming, electronics, and mechanics all in one project. It’s known that this project is common for most of the makers and tech students and today I am going to give it a revisit …

How to build an Arduino Obstacle Avoiding Robot using Cardboard

Back again with another Arduino Bluetooth RC Car tutorial but with an advanced feature that makes your car autonomous by adding ultrasonic sensors to the RC Car you have made before!. Yeah, I know that you may have seen other tutorials using ultrasonic to make the car/robot avoid obstacles ahead, but I am going to …

How to make an Arduino Bluetooth RC Car using Cardboard

Cardboard crafts are one of the most popular and easy to make DIY stuff. Mixing this with the unmatchable enjoyment of RC Cars and the ease of using Arduino, I am going to show you how to make a Cardboard Arduino Bluetooth RC car that you can control via Bluetooth from your smartphone. ﻿ …

Arduino Security Camera Have you ever wanted to check your home in real time? Afraid that maybe someone has stormed in, don’t remember if you shut the door or not or maybe wanna check if your Hyper-energetic dog has broken any of your dishes AGAIN!! 🙂 Then this is the perfect place for you cause today …